Welcome back to the Starting 5. The Starting 5 is written multiple times per week by Adam Spencer to keep you up-to-date on all the news and events in the world of college hoops. You can follow Adam on Twitter at @AdamSpencer4 and @SDSBasketball.

Quick note before we start today’s column. Do you love college hoops? Of course you do if you’re reading this! We’ve officially launched “Blue Chip Grit,” a twice-weekly newsletter about all things college basketball.

Kentucky held steady at No. 5 in this week’s AP Poll after a 66-55 win at Alabama on Saturday night. KenPom has the Wildcats at No. 3 in his metrics, sporting the No. 5 overall offense and the No. 11 defense in the country.

Well, let’s just say that defense was on full display on Saturday night in Coleman Coliseum, as Alabama’s shot chart had more “X”s than a drunk pirate’s treasure map: 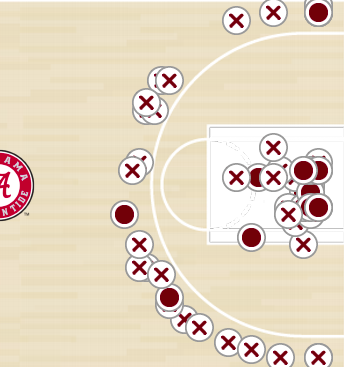 For those keeping track at home, that’s Alabama going 3-for-30 from beyond the 3-point arc. For the mathematicians among us, that’s a 10% success rate from long range.

Yes, some of that was just Alabama missing good looks. But, an even bigger part of it was Kentucky’s aggressive defense. This is the kind of aggressive team defense that made it hard for Alabama sharpshooters like Jaden Shackelford and Jahvon Quinerly (who combined for 13 total points on 0-for-10 3-point shooting) to score:

This type of defensive possession gets me out of my seat! Excellent job getting back in transition D. Sahvir Wheeler fights over two ballscreens with pressure defense. Then, TyTy Washington has an elite closeout on #5 Shackelford. Tightens up as the ball comes towards him!!! pic.twitter.com/wfZiuDUSFP

TyTy Washington led Kentucky with 15 points, but he was just as active on defense. Here he is keeping Shackelford from getting to his preferred left hand, tipping a pass and forcing a turnover:

TyTy Washington is the best defender on this Kentucky team and it isn’t particularly close. His ability to both stay in front of the left hand drive by #5 Shackelford & then get a deflection is elite. He deserves some low key All-American buzz. pic.twitter.com/F2297oNtCT

The Wildcats are so good at using their defense to get easy transition buckets, too. Here’s how Kellan Grady’s elite effort leads to an easy fast-break dunk by Davion Mintz:

Elite defense leads to easy offense. Kentucky was able to turn Alabama over 15 times last night including 12 steals. Those Live ball turnovers are important. Couple things in this clip:

When Kentucky is playing swarming defense like that, the Wildcats are a true national title contender. Now, we’ll see if they can keep the good times going at South Carolina on Tuesday night.

When shots aren’t falling and the offense isn’t working, you need guys who aren’t afraid to force the issue and make things happen. Auburn has 2 of those guys in KD Johnson and Wendell Green Jr.

Johnson, who led the Tigers with 20 points in Saturday’s narrow 74-72 win at Georgia, was making plays like this all game:

Green finished with 19 points, scoring the game-winning bucket in the final minute:

FOR THE LEAD!!! #WarEagle pic.twitter.com/fgN8CClZSQ

Yes, there was a lot of contact on that play for there to be no whistle at all, but the Tigers continue to find ways to win. They also continue to deliver insane highlight-reel plays, including this alley-oop off the backboard from Green to Devan Cambridge:

The 2-point win over Georgia means that, in the Tigers’ last 2 road games, they’ve only managed to beat Mizzou and Georgia – 2 of the worst teams in the SEC – by a combined 3 points. They’ll need to play a whole lot better on Tuesday night at Arkansas if they’re going to remain unbeaten in SEC play. We’ll discuss that game more later, but let’s switch to some Hog talk for now:

Up. Under. AND ONE. pic.twitter.com/5LjdhXWZO2

I don't know how Zakai Zeigler made this floater. HUGE arc. #Vols pic.twitter.com/pBd5Sj99ea

Next, let’s take a look around the Big Ten.

Since an embarrassing loss at Maryland, the Illinois Fighting Illini have been on an impressive run. The Illini have rattled off 4-straight wins – vs. No. 10 Michigan State, at Northwestern, vs. No. 11 Wisconsin and at Indiana.

Illinois found itself trailing 36-34 at halftime, but a 10-0 run midway through the second half, punctuated by this big basket from Trent Frazier, proved to be the turning point in the game:

Frazier was electric, scoring a game-high 23 points. Here’s him leaving an Indiana defender in his dust with a lethal crossover:

.@trentfrazier is a bad man 🤑

Alfonso Plummer had 14 points and continues to be the Big Ten’s best 3-point shooter:

Kofi Cockburn had a pedestrian (by his standards) 17 points and 8 rebounds, but he managed to limit Indiana big man Trayce Jackson-Davis to 6 points and 6 boards. That all-around effort from Cockburn helped earn him the B1G’s Player of the Week award.

Now, we’ll see if the Illini can snag another big road win when they play at No. 3 Purdue on Tuesday night. More on that game in a bit. Speaking of the Boilermakers, though…

And another lol. As if he needed more highlights for his reel… pic.twitter.com/0XmkaXRNUj

Workman-like 24p and 15r on 9-18 FG and 2-4 3FG for Keegan Murray. Varying his offensive attacks while guarding 3-5 down the other end. pic.twitter.com/PJqC0qhk9R

Next, let’s take a trip to the ACC and around the rest of the country.

I’ve said it about Auburn, and I’ll say it again – great teams find ways to win games they have no business winning.

Auburn did it at Mizzou and at Georgia recently. Duke absolutely deserved to win at North Carolina on Saturday, mopping the floor with the Tar Heels in Coach K’s last trip to the Dean Dome.

Yes, Duke battled back after Virginia controlled most of the game, taking a 68-66 lead with less than 10 seconds left. That’s when Reece Beekman decided to hit Virginia’s second 3-pointer of the night, though:

It appeared Beekman was fouled on his followthrough, too, so he should have gone to the line with a chance for a 4-point play. It wasn’t necessary, though, as the Cavaliers held on for the 69-68 road win.

This game illustrates exactly what makes Duke frustrating. Even with all that talent, the Blue Devils sometimes have trouble finishing off opponents. That’s what separates Duke from the top-tier teams like Auburn, Gonzaga and Arizona this year.

Even more baffling? Paolo Banchero didn’t attempt a single shot in the second half until a desperation heave at the end. Yes, the Hoos were doubling him every time he touched the ball, but Duke’s coaches needed to scheme ways to get him open looks and simply didn’t. Awful strategy when you have a top-3 NBA Draft pick on your roster in a tight game.

I’d assume that the primary option of this set was for Ochai Agbaji to come off the screen and catch the ball on the right wing, but Cortney Ramey blows it up pic.twitter.com/QV3RPiMBI6

CHET HOLMGREN WITH 11 POINTS IN UNDER TWO MINUTES 🤯 pic.twitter.com/YBeBtOP71q

Now, let’s take a look ahead to the next few days of college basketball action.

I’m calling it – we’ve officially hit the stretch run in college basketball! Teams are a little more than halfway through their conference schedules, and that means there are a ton of big games on tap for the next few days. Here are the 5 games I can’t wait to watch between now and Friday:

We have some games that will decide who is leading conferences, some major road tests and big-time rivalry games. Who will win and who will take steps back? These next few days are so important for a number of teams around the country.

Enjoy the Starting 5? Have a question? Want to yell at me about something? Follow me on Twitter @AdamSpencer4 or email me at ASpencer@SaturdayDownSouth.com.