Welcome back to the Starting 5. The Starting 5 is written multiple times per week by Adam Spencer to keep you up-to-date on all the news and events in the world of college hoops. You can follow Adam on Twitter at @AdamSpencer4 and @SDSBasketball.

Just when Memphis appears to be dead in the water, the Tigers go and pull off a huge upset of Alabama.

This is a Memphis team that has lost to Georgia and Ole Miss out of the SEC already this year. Those are 2 of my bottom 4 SEC teams in my weekly power rankings. Alabama was ranked No. 1 in my rankings, which come out on Tuesday. So, naturally, the Tide lost immediately to Memphis on Tuesday night.

What was the issue?

Well, for one, Memphis actually plays good defense. Most importantly, the Tigers don’t foul down low. The Tide score in 2 ways most efficiently – from 3-point range and by getting to the charity stripe.

Nate Oats’ squad shot fairly well from the floor, but Memphis did a great job making sure the Tide couldn’t make 3-pointers from the wings: 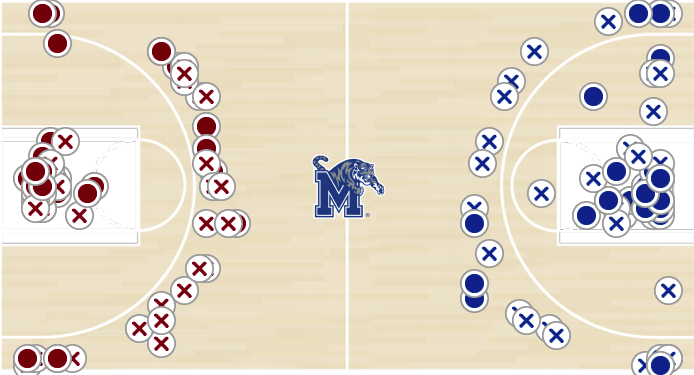 But, the key to the game was the free-throw line. Memphis only committed 12 fouls all game long. That led to only 12 Alabama free throws, of which the Tide only made 8. That’s a fine percentage, but that’s not a high-enough volume for a team like Alabama.

If Memphis follows that exact formula, a win over Tennessee on Saturday isn’t out of the question.

LSU continues to rack up wins. The Tigers are 9-0 after Tuesday’s 40-point win over Northwestern State.

But, I want to talk about Tari Eason, who has been the breakout star for the Tigers this year. When Adam Miller, the transfer from Illinois, was injured before the start of this season, I was admittedly worried.

Instead, Eason has become a star. He’s led the Tigers in scoring 6 of the last 7 games. He’s shown he can be a go-to guy on that end of the floor for Will Wade’s squad.

Eason, along with teammate Efton Reid, are among the most-improved players in the country by this metric:

Most improved players since preseason in the https://t.co/cegyfz8ykZ player ratings:

LSU faces several ranked teams in a row when SEC play starts on Dec. 29, but for now, the Tigers are the lone remaining unbeaten squad in the league. We’ll see how long Eason, Reid and others can keep the winning streak going!

There were literally 2 Big Ten games between Tuesday and now. So, needless to say, this section is going to be pretty short. Kudos to Minnesota for taking down Texas A&M – Corpus Christie, but we’re going to focus on Wisconsin.

The Badgers, currently sitting at 9-2 on the season, managed to hold off Nicholls 71-68 on Wednesday. That’s a rather non-convincing victory. Yes, the Badgers were without leading scorer Johnny Davis, who missed the game with a non-COVID illness, but Wisconsin should still be good enough to beat Nicholls by more than 3 points even without him.

How long will he be out? That remains to be seen, but we’ll see how the Badgers fare with or without him moving forward. Relying so heavily on 1 player is never a good recipe for success in college basketball.

Now, let’s take a look around the ACC and the other conferences in college hoops.

It has also been a slow week in the ACC. Sorry, that’s just the way these past few days have gone. So, this particular section is going to focus on one player.

But, Wendell Moore Jr. is doing some incredible work and has been majorly overlooked nationally. In Thursday night’s 92-67 win over Appalachian State, Moore led the way for the Blue Devils. He had 21 points, went 4-for-4 from 3-point range, dished out 6 assists and grabbed 5 rebounds. What a great all-around effort!

This highlight reel is ridiculous:

He’s a superstar in the making. Don’t overlook him just because he’s not named Paolo Banchero. He is having a huge impact for this Duke squad and will be crucial for their national title hopes.

Now, let’s look ahead to the best games of the weekend.

I’d hoped that COVID-19 was done canceling college hoops games, but unfortunately, that is not the case, as there have been a few high-profile matchups canceled in recent days. Saturday’s showdown in Las Vegas between Kentucky and Ohio State is one of the biggest games to be called off. But, there are still plenty of good matchups between now and Tuesday. Here are the 5 games I can’t wait to watch:

Not as great of a schedule as we could have had for this weekend, but still plenty of quality games. It should be fun to see which teams can avoid major upsets, especially with some ranked teams heading for neutral-site or true road games.

Enjoy the Starting 5? Have a question? Want to yell at me about something? Follow me on Twitter @AdamSpencer4 or email me at ASpencer@SaturdayDownSouth.com.