North Carolina vs. Duke: Who wins the all-time battle?

The Blue Devils and Tar Heels embody what it means to truly be a college basketball blue-blood. The programs have captured 11 national titles between them, and reached a staggering 38 Final Fours (UNC 21, Duke 17).

On the personnel front, UNC and Duke have produced 26 ACC Players of the Year, and an astounding 19 National Players of the Year. Legends like Jordan and Laettner, Worthy and Williamson, and the generals patrolling the sidelines (Dean Smith, Coach K), make a hypothetical Tobacco Road showdown tantalizing.

But why settle for an endless argument when you can put the legends to work on the virtual hardwood?

Thanks to the tireless work of folks over at Operation Sports, games like College Hoops 2K8 have the capability to simulate what-if matchups just like this one. After selecting 10-man rosters for North Carolina and Duke, I was able to use custom rosters from Operation Sports to pit these legendary teams against each other.

The players’ height, weight, and attributes were adjusted to reflect their on-court likeness. The overall rankings of each player use a scale that values each player’s statistical accomplishments (points, rebounds, assists, etc) and accolades (All-Conference, All-American, etc.) to determine the rating for each player.

So without further ado, here are the rosters for All-Time Duke and All-Time North Carolina and the outcome of their virtual matchup. 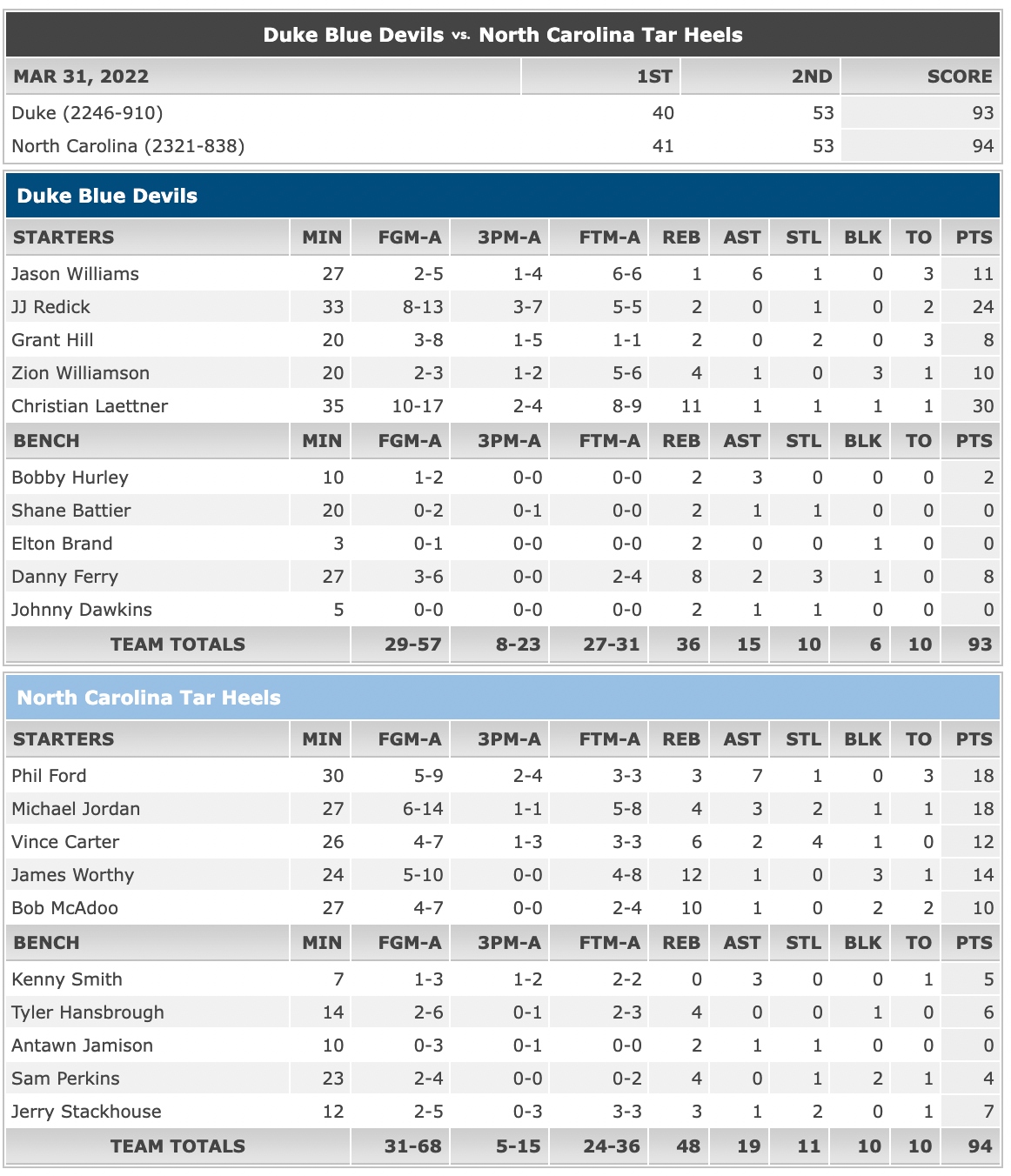 North Carolina jumped out to a 9-5 lead in the early going behind a Phil Ford “and-1” and a Michael Jordan fast break slam. The Tar Heels had 8 dunks in this game, 4 coming from Jordan.

Duke quickly answered, feeding Christian Laettner on back-to-back possessions. The 1992 National Player of the Year hit a pair of baseline jumpers, setting the stage for a see-saw battle in the first half. The Blue Devils were primed to take a lead at the 11-minute mark of the first half with a thunderous Zion Williamson slam, but the hefty high-riser was called for a charge. Williamson went to the bench with 2 fouls, replaced by 2-time ACC Player of the Year Danny Ferry.

North Carolina’s frontcourt was active on the offensive glass in the first half, nabbing 9 offensive boards. These boards helped UNC pump in 14 second-chance points in the first half alone. Duke’s equalizer was their accuracy at the foul line and their ability to draw whistles. Jason Williams sent James Worthy to the bench before the last media timeout of the first half with his 3rd foul. Sam Perkins played meaningful minutes for Dean Smith until Worthy’s return with 15:42 remaining in the game.

Nursing a small lead, UNC ran its offense through its super-talent backcourt. But despite the brilliant play of Jordan and Ford, there were 14 lead changes and 11 ties in this game, proving the championship mettle of both programs. A corner 3-pointer from Ford with 10:02 remaining in the game gave UNC its largest lead 72-67. (Notable because, while Ford left as UNC’s all-time leading scorer, he graduated before the ACC adopted the 3-point line.) Duke clawed back, thanks to a Grant Hill old-school 3-point play and a top-of-the-key jumper from Laettner.

With the game tied at 83 with 4:10 left, Dean Smith called timeout and drew up a play for Vince Carter. A backdoor cut and perfectly executed alley-oop from Kenny Smith, resulted in a Carter slam and a 2-point lead for the Tar Heels. No, it wasn’t like Stackhouse’s reverse “and-1” jam at Cameron Indoor, but it was important, nonetheless.

Trailing 91-90 with 43 seconds remaining it was Mike Krzyzewski’s turn to dial up a play. Coach K responded with a pick-n-roll opportunity for Laettner, but UNC was quick to double him. The heady Laettner dished out his only assist of the game finding Ferry in the lane. Ferry’s floater over Bob McAdoo rattled home and he drew the foul in the process. Ferry calmly knocked down the foul shot, giving Duke a 93-91 advantage with 19 seconds remaining.

North Carolina’s final possession was designed to give Jordan an iso opportunity on the left wing. (It worked against Georgetown, right?) As Jordan took Grant Hill toward the baseline with his left hand, he rose up only to pass the ball to a cutting James Worthy near the elbow. A quick Worthy pump-fake drew Zion Williamson off his feet and the savvy veteran generated contact and sunk the game-tying leaner in the process. Worthy’s game-winning foul shot swished home with 2.6 seconds remaining. 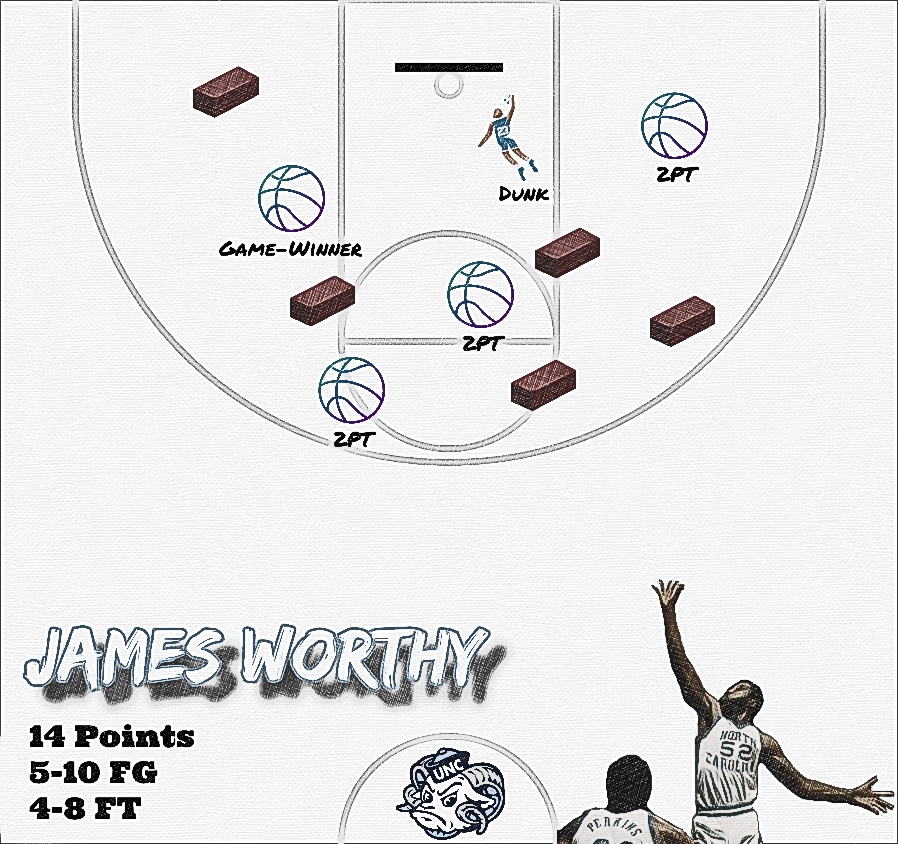 A final half-court heave from JJ Redick failed to fall for Duke and the Tar Heels rushed the court to celebrate their victory in this legendary showdown.